My Talk Show Interview with YA Author Extraordinaire, Blythe Woolston

Welcome to the studio, Blythe! So glad you could be here.

And the reason we're here today is that your third YA novel, Black Helicopters, just came out from Candlewick. Congratulations! Let's hold this book up so our studio audience can get a better look at it. 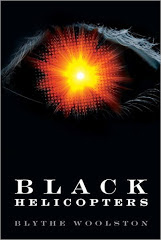 A teenage girl. A survivalist childhood. And now a bomb strapped to her chest. See the world through her eyes in this harrowing and deeply affecting literary thriller.

Viewers at home, you'll have a shot at winning a signed copy of this fabulous book, don't you worry.

Shall we start with a few quick questions to get you limbered up, Blythe? That’s a rhetorical question, you don’t have to start answering questions just yet….

All right, NOW you have to start answering questions. Here we go:

KLM: I’m sure you get this question all the time: Is that your heart on the cover of your Morris Award-winning debut, The Freak Observer?

BW: No. I am heartless. And not photogenic.

KLM: Yes. Well, not everyone has attractive ventricles. That’s understandable. So...you live in a place called “Montana.” As I understand it, “Montana” is somewhere way, way over there. *gestures in a westerly direction* I’m curious to know how many bison you personally own. Not including the one you ride to do errands to the grocery store, etc. I’m gonna guess four. Is that correct?

BW: In your innocence you have blundered into the middle of one of the most vitriolic feuds in Montana. I am pro-bison. The anti-bisoners have the politicians by the dangly bits, and it is, therefore, extremely difficult to keep backyard bison. That is why I can’t have this, which is one of my heart’s desires.


KLM: Right then. *puts bison on shopping list for Blythe’s birthday, politics be damned* Onward to our next question…. In a post-apocalyptic world, let’s say I had my own Thunderdome, and you’ve just stumbled across it while fleeing killer, sentient robots.  What non-writing life skills do you possess that would make me want to keep you around instead of chucking you into my gladiator-style entertainment arena?

BW: I will be your Salacious Crumb.

And I know how to operate the methane generators. Plus, the best defense against sentient robots is chaotic random cluckery. I got that. I got all of that.

KLM: Oh, yes! I would very much like a cackling lackey at my side at all times. OK, you’re in. I also think you’re sufficiently warmed up now so let’s get to talking about your latest book, Black Helicopters. This is a dark, intense, can’t-stop-reading book.  Tell us about Valkyrie White. What about her and her situation captured your imagination so much that you wanted to write this novel?

BW: You are familiar with the “chestburster” in ALIEN? I wanted to write this book as much as I wanted an alien to blow my ribs apart and escape into the world. The writing process had a deceptively innocent beginning. I needed a chapter to bring to the BigSky SCBWI workshop. I sat down and wrote the first chapter, which is pretty much word-for-word as it appears. I could pretty much plug into Valley’s voice whenever I sat down to write, but it was painful. I still don’t like to think about it.

KLM: Was she notable in that way? The way you could plug right into her voice. Have you felt that way with previous MCs?

BW: Come to think of it, the others—Loa, Polly, Odd, and even my WiPs storytellers Velma and Bunny Bun—have been just as easy to find. Although Velma is a little extra weird since she has writerly aspirations and indulges in mimicry. So what made me say that in particular about Valley? I was more creeped out by the experience. It’s a little pathological, the voices in the head thing, at best.

KLM: What makes a character a villain for you? What trait do they possess or not possess that puts them in that category?

BW: I always turn to the etymological dictionary when I face these questions, and, you know what? It says that villains are low-born. Low born. Working class. Not two coins to rub together, not-a-pot-to-piss-in poor. So that’s the definition of a villain. It’s an antiquated fossil of class prejudice. So I am not going to use that word. For me, the Big-Bad is about abuse of power and ruthless self-interest. There are Big-Bads in Black Helicopters.

KLM:  Do you think of Valkyrie as a villain?

BW: What what? NO! Is she not a kick-ass her-against-them heroine? Does she not take on the monumental powerful government in the name of justice? Okay, I am sorry, really, really sorry. The deal is this: Until we get over some of our hero(ine) worship, until we get over giving formulaic answers to complex questions, we are all going to have the blood of children on our hands.

KLM:  Your MCs are kids with few options for pulling themselves out of their life situation. How does the rural setting and socio-economic class affect your MCs in Black Helicopters?

BW: In every way.  They are all Cinderella—without a fairy godmother. So they don’t have fancy clothes, and their little mouse friends aren’t much help, and meeting the Prince at the ball isn’t going to happen. And they know that. We all know that.

KLM: Did you ever consider alternate endings for the novel or were you always pretty sure how Valkyrie’s story was going to end?

BW: The end of Valkyrie’s story was always inevitable. I knew what happened, but I still resisted writing it. When the book went to my agent and to the editors, it just sort of stopped without ending. This is one of the reasons I need editing so desperately—I’m a coward and I step back, I blink, I pretend I don’t know. I must be a freaking nightmare to work with. I’m a feral cat hiding under the couch and my poor, patient editor needs to resort to tuna cans and broomsticks to get me to act right.

KLM: You have mad writing skillz. I’m sure you could probably write an award-winning Denny’s menu, but you choose to write YA. What is it about the genre that attracts you? 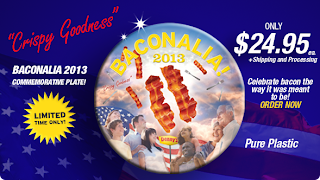 BW: You flatter. How could I ever top BACONALIA’s “Belly flop in an empty pool? EAT BACON. Boom. Recovered.”?

KLM: That is pretty hard to top. Except maybe with whipped cream.

BW: But why YA? As in everything else, I came to it accidentally. That said, I could not have washed up on a more hospitable shore. Here’s the deal about YA: It’s a real frontier. The rules are muddy and streets are fluid. (I should qualify that by saying I lurk in a side alley of the bunny-eat-bunny world—some neighborhoods are petunia-scented and well-lit.) As a writer, I have all the room for experimentation and exercise of craft I could possibly desire. I know my readers are smart and motivated. I know if they don’t like the book, they are going to drop it and go find something they do like. That’s pretty much perfect.

KLM: Lastly, what are the odds that you’re ever going to write a light-hearted rom-com, Blythe?

BW: I was about to say never; then it occurred to me that the gauntlet has been thrown.

“Tony has snagged his dream summer job at a five-star resort. It sucks. In a world where everyone else is on vacation, he’s expected to dress like an old-timey barbershop tenor and wear a name badge that announce she is “Tony Montana”--because he’s Tony. From Montana. The only bright spot, and it is super-nova-rainbow-at-midnight bright, is Blue Hawaii, the drop-dead-gorgeous girl who scoops ice cream in the main lodge. Sadly, Tony can’t get up the courage to ask for a Hokey-pokey cone. So he’s stuck sweating and trundling linen carts packed with dirty sheets and towels to the laundry room. It’s a good thing he has the other “Toni Montana” to keep him sane. She gives him romantic advice while they play “guess that stain” and commiserate about the number of times they have heard the words “Say hello to my little friend.” BLUE HAWAII is a light-hearted rom-com for YA audiences that is now complete as a 172 word synopsis.”

KLM: Hey, I see anybody out there using the name “Blue Hawaii” for one of their MCs, and I will have the intellectual property lawyers on your @ss in a hot second. You got that, Internet?

Thank you, Blythe! And now for the best part. I’m going to give away a signed copy of Black Helicopters. Yes, signed! And if you ask nice Blythe might even write, “I will be your Salacious Crumb.”

To enter to win, just leave a comment (click on the post title to get the comment box to come up). I’ll make a random selection using some sort of randomizing thing. You’ve got until noon on MONDAY, April 15. Go! Hurry! Comment!
Posted by Unknown at 8:00 AM