I’ve determined that the maximum number of characters in any given scene cannot exceed eleven.

And by “in a scene,” I mean participating in conversation in a real way, not merely hanging about to create atmosphere. 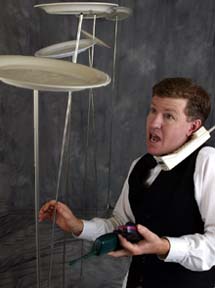 Yes, of course, you might have a scene taking place where lots of people are congregating in the background, say in an epic battle scene.

But characters with names who are more than potted plants actually interacting?

Beyond eleven, things get dodgy. Time and space begin to warp. And even at eight or nine characters in a scene, you’ve got to be like one of those plate spinning guys, who I imagine must all die of heart attacks before turning thirty.

I arrived at this number—we’ll call it the Maximum Scene Occupancy rule—based on J.K. Rowling’s work. Because here’s the thing, if J.K. Rowling won’t use more than eleven characters in any one scene then you shouldn’t either. She has enough Imagination BTUs to heat the entire Milky Way. She knows her character histories back several generations. She knows that the bus driver who took one of her minor characters to school was wearing mismatched socks last Wednesday during bowling practice, which is a scene she cut out of the book six months earlier.

But even she has her limits.

I once counted up the number of characters in one scene from HP5. I think it was the scene when Harry arrives at Grimmauld Place for the first time. There are, at one point, six or seven Weasleys, Harry, Hermione, Sirius, Lupin, and Tonks discussing matters. (Yes, yes. I know you HP people will point out that there are a few other characters come and go as well but they don’t say or do much.) I checked a few other scenes and this seems to hold true. Every ensemble scene maxes out at around eleven characters.

I don't know about you, but I start getting a little wobbly when I have more than five people in one place all interacting. Sometimes I forget characters are even in a scene and that makes me feel terribly guilty. Especially when they call to tell me I forgot to pick them up from soccer practice.

What’s the biggest group of characters you’ve ever juggled in any one scene you’ve written?
Posted by Unknown at 10:09 AM