Summer used to start on June 21, did it not?

Now I got these smartypants kids who tell me, no, it’s actually June 20 this year because of the blah, blah, blah and the effects of an additional minute added thrice quarterly, take into account the tilt of the earth, and carry the one.

Anyway, apparently whoever is in charge of these things just up and decided when the solstice is and TODAY is the first day of summer, not tomorrow. What is this crap, I ask you?

On a related note, I woke up in a panic this morning.

I’m a full-time mom of four and for all intents and purposes, a full-time writer, and every year the summer arrives and I stand before its gaping maw and announce tremulously, “We’re going to have the best summer ever, kids!”

Which is sort of like announcing that this phase of the war in Afghanistan is going to go especially smoothly, for sure, uh-huh. *high five* 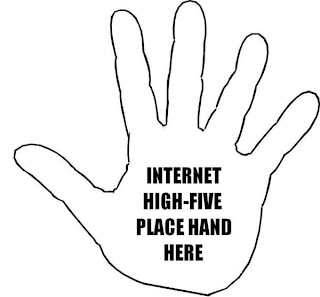 Because high fives make everything seem possible, do they not?

So, yeah, summer comes, and I make plans to keep everyone busy, myself included, but of course me and the kids are working at cross purposes as far as that goes. And inevitably, despite my best efforts, things turn into mushy whining and squabbling and by late-August—often far sooner—the household falls under the spell of grumpy torpor that makes a prison cell in Guantanamo Bay seem cheerful by comparison.

By August 31, absolutely EVERYTHING will be lame, and even my suggestion that the kids "go steal some cars and see if you can outrun the Smokies like me and your uncle used to do back in the day" will fall on ears made deaf by sheer boredom.

But that’s NOT going to happen this summer. No, this year will be different. I’m so sure of it!

Hell to the yeah!

And what are your outlandishly optimistic summer plans, writing or otherwise?
Posted by Unknown at 9:53 AM