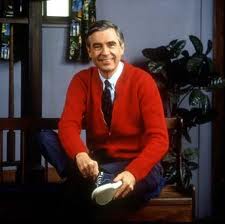 Mr. Rogers gave us so much. A kind, gentle spirit for one thing.  A guiding life philosophy, for another.

I’m not sure if he’s the one who came up with this idea, but he’s the one I heard it from first: “Live your life so that you have no fear of the truth.”

That’s good stuff, that is. Mr. Rogers was awesome. And so was his neighborhood.

OK, sure, there was the bad puppetry. That Lady Elaine Fairchilde always creeped me out. And maybe his unusually cordial relationship with his delivery man skewed my impressions of how grown-ups acted toward one another. I mean, has anyone ever talked to a delivery man? Delivery men I know pretty much chuck stuff at my door and drive off.

Lately though, it's become clear that Mr. Rogers influenced me more than I ever realized because of his sweater and sneakers thing. When Mr. Rogers changed into his zip-up sweater and sneakers, it signaled the transition from the big grown up world to the slowed-down world of home and make believe. And that’s exactly what I do when I get down to work. I will often put on my comfiest hoodie as I suit up for battle with the Muse.

Here's what I generally put on while I write. 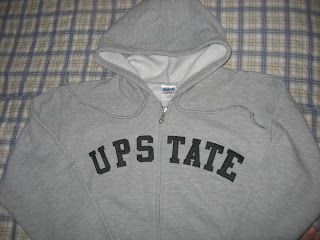 This is my Upstate New York sweatshirt. It's one of a kind and also a bit of a joke between my husband and me. See, my husband’s from Brooklyn and there’s this line of Brooklyn themed clothing that all the cool kids wear. But I won’t wear it because I didn’t grow up in Brooklyn, and I feel it would wrong.

My husband special-ordered this Upstate hoodie for me so I could represent my lame-o, economically depressed, constantly cloudy ‘hood.

And if you're inclined to take issue with that characterization, let me just point out that ain't nobody's writing rap songs about wanting to get back to Upstate New York. And therein lies the difference between cool and not cool.

And there it is, right there. Mr. Rogers' wisdom at work: I'm not trying to be something I'm not. I'm living my truth ... about being lame. And I'm doing it in a comfy hoodie.

Do you have a uniform you wear when you're writing? A sweater? A pair of slippers? Sweat pants? Favorite vintage Beastie Boys t-shirt?
Posted by Unknown at 11:27 AM