I’ve mentioned my crazy, ramshackle house before, specifically the abundance of awful wallpaper and the monumental, embittering efforts it took to remove all of it.

Because APPARENTLY people applied wallpaper with rubber cement back in the day, thereby sentencing future generations of homeowners to eighth-circle-of-hell type labors that take up years of weekends.  YEARS. Scraping and scraping and scraping like soulless dogs doing penance for crimes unknown.

The family who owned this place for sixty-odd years before we bought it had four children and at some point--the early 1960s would be a good guess--they installed an elaborate system of intercoms. Every room has an intercom (none of which still work). I’m sure it must have been cutting-edge at the time.

They also had a live-in maid. Or rather, as the story goes, a series of young, African-American maids trucked in from the Deep South, none of whom were probably older than twenty.

I assume the intercoms were to call the maid? Maybe? I’ve never had a live-in maid (well, I mean, other than myself) so I’m just guessing that’s how it worked. Having lived here now for more than five years, I'm not convinced that the intercoms were even remotely necessary. It’s not like the house is so huge that calling out, “Hey, Mary, bring me a sandwich!” wouldn’t have worked perfectly well. This is why I assume the former owners must have been very formal people who mostly stayed in their rooms, operating intercoms as the need arose and otherwise not speaking.

The "bedroom" where the maid slept was in the basement, and I use quotes because calling this “bedroom” a bedroom is a stretch. It’s five-and-half feet by about six-and-a-half feet and has a very low ceiling. It’s a closet, really. It can’t have held anything more than a single bed and maybe a small dresser.  We use it to store the Christmas tree stand and decorations and all that.

I’ve joked many times that my dream office would be in a bunker, with walls so thick, Saddam Hussein would have envied them. See, my children, they find me, especially when I work.  Normally I don't write on the weekends, but I’ve been trying to get a first draft done, and so I’ve been taking my laptop and slinking off, hiding here and there throughout the house, gruffly rebuffing whoever comes to the door. But they always find me. I'm like a writing fugitive. I never know when my time will be up.

Well, duh, it finally occurred to me that if I shifted some stuff around and set up a table and chair down there in the maid’s room … voila! Instant writing bunker! The kids don’t like to go down there because the maid’s room is in the dark, spidery part of the basement. Its gloominess is probably why, at some point, one of the maids who was lodged there drew a reproduction of the ceiling of the Sistine Chapel on the walls. 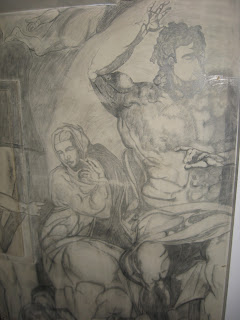 For serious. At one point, all four walls were filled with pencil drawings, and I guess the former owners of our house weren’t too thrilled about it so they painted over her mural with the exception of the wall pictured above.

Some days I feel like moping about the long journey to publication. Please. What about her? I don’t know her name or what became of her, but when I imagine her sitting in that basement room, alone, drawing and sketching after answering intercoms all day...yikes.

She filled a basement room with pencil sketches of religious paintings. Talk about yearning. I got nothing on her.
Posted by Unknown at 11:45 AM