One Hour a Day 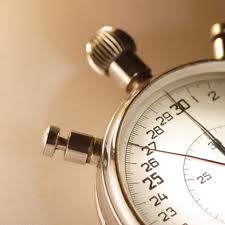 I have one hour to write this post. Possibly less. Let’s see how I do.
This new baby -- he likes full concierge service from his mother. What is up with that? It’s been darn near impossible to find time to write when I’ve been fetching warm towels, refilling his drink, and explaining why I can’t get him the chef’s table at Le Cirque on short notice.
I now understand how spoiled I’ve been for the past year. Six months ago I was able to write as much as 20 hours a week. I know, right? That’s an awesome amount of time.
But I’m trying to look at it this way: perhaps having all that time allowed me to become mentally flabby. Yes, and extremely inefficient.
Yeah. That’s it. Having more time to write is obviously a bad thing.
Now that I’m down to one single solitary hour a day (if that), I will have to concentrate my efforts and get all my words in order before sitting down to work, like some kind of writerly version of mise en place. But this is good, no?
Supposedly Virginia Woolf only wrote for one hour a day, and she managed to be incredibly prolific. OK, sure, she also kinda killed herself, but hey, nobody's perfect. She wrote loads of novels and essays only writing one hour a day long before she killed herself. So there. I’ll take heart in that – the one hour thing. Not the suicide thing. I’ll just try to put the suicide thing out of my mind. I really don’t think the two are at all related.
It’s not like I’ve never been pressed for writing time before. When I first got back into writing – this was back in 2008 – my kids’ schedule only allowed me to work early in the morning, so I started getting up at 4:45 am so I could squeeze it in. That’s right, O dark 4:45. That’s how gonzo I was about getting work done. It sucked, but I did it because I was hungry to write. Of course, by the end of the day, having gotten up at that obscene hour, I was so punchy that I should not have been operating heavy machinery. Or even light machinery, if there is such a thing, although if there is, no one seems too worried about people operating it in an impaired state. What is light machinery anyway?  Blenders? Hair dryers?
(The point! Get back to it, woman!)
Right! Getting to point now...anyway, circumstances fortunately changed, and I could work longer, at a less insane hour. Which I was glad about because getting up that early, even if you're doing it so you can ride unicorns through Candyland while people throw hundred dollar bills at you, is a grim prospect. It was so bad, in fact, that I was worried about ever having to go back to that kind of crazy-intense writing life. 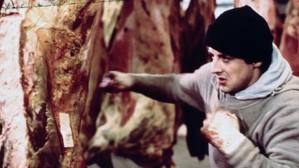 But now I'm once again looking at the possibility of having to do that if I want to get work done. Honestly, I’m not sure I’m up to it. But I’ve got to be. Somehow I’ve got to get back into that “Eye of the Tiger” mode. Gotta feel that writing hunger bad enough to drink raw eggs and punch haunches of beef until my knuckles bleed.

(Yeah, that's right. I referenced Rocky III, Survivor, and Virginia Woolf in the same blog post. What of it?)
How much time do y’all have to write each week? Is it consistent or does it vary wildly from week to week?
Posted by Unknown at 6:00 AM