There was this guy in my MFA program, and he did this thing that some writers do that I hate hate hate.

Here it is: you’d be talking to the guy, thinking you’re having a normal conversation, and then you or someone nearby would say something he found interesting, and he'd respond, “Oh, I’ve got to write that down before I forget it.” Then out would come the little notebook, and he'd actually do it. He'd write down what he'd heard with the utmost self-satisfaction at having captured ... whatever.

Like the world was his zoology experiment, and we were all just rare macaques for him to observe and report upon. Totally annoying.

I’ve been advised a number of times to always carry a small notebook so I can jot things down in case inspiration strikes. I don’t do it. 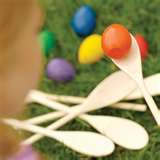 I do my best thinking when I’m out walking or riding my bike. Somehow the motion kick starts my brain. For a long time, I’d get these ideas for stories or plot fixes or whatever, and I’d think I’d have to rush home and write it all down before I forgot the details. It reminded me of that birthday party game -- the relay race where you’ve got to carry an egg on a wooden spoon without dropping it.
But then I stopped doing that because somewhere along the line I realized something: good ideas are not that fragile.
OK, admittedly I do still write things down occasionally -- things that occured to me while I was out for a walk -- but I certainly don’t hurry along with that egg, trembling and fearful that I’ll drop my good idea on the pavement before I get home, and it'll be ruined. Maybe I just believe in a survival of the fittest sort of approach when it comes to spinning fluffy new ideas into actual books. If it’s a good idea, I’ll remember it. And if it’s a truly great idea, capable of sustaining an entire novel, it’ll persist almost to the point of my needing a restraining order against it.
This is not to say that I don’t respond to inspiration with the appropriate respect and, rarely, with a sense of urgency, it’s just that I don’t freak out about it. And if I’m talking to someone at a party, I, you know, simply talk to him. I’m not there to study and record behavior, to treat people like they're fodder for my work. Bleh. I don't care how great a writer you are. Who wants to be around someone like that?
Geez, now I'm wishing I’d had the nerve to rip that little notebook out of my MFA chum’s hands, throw it on the ground, and clog dance on it while shouting, “There. Observe and write about that, Thoreau.” Of course then he probably would have, and I’m sure he would have turned it into a very funny story. You just can’t win against these writer types.
Posted by Unknown at 10:32 AM