You ever have a pet goldfish when you were a kid? Something like this, maybe? 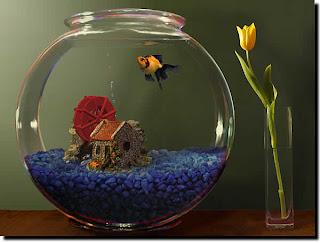 I had one. Someone gave it to me for my birthday. It was in a plastic bag when I got it, and I transferred it to a small glass bowl and stuck it on my nightstand.
That goldfish probably wasn’t going to last out the week in that bowl because basically what goldfish are best at is keeling over. My father saw this sad, oxygen-starved thing and thought, this will never do. So he bought a tank for it. With an air filter and some plastic plants and colored pebbles. The whole shebang.

As time went on, he thought the goldfish might be getting lonely, so he bought a couple other goldfish to keep it company. The goldfish seemed to be thriving in their new aquarium, but then he noticed that they were starting to look a little cramped in their tank, so he went out and got a bigger tank for it. (I can’t remember at what point these goldfish ceased to be mine, but let’s face it, this is always what happens – fish start out as a kid’s pet and end up a parent’s responsibility. Also, my Dad projects a lot of feeling onto fish, apparently.)

So the thing about goldfish is that they do what? They expand to the size of their tank, now don’t they? The bigger the tank, the bigger the fish. With each upgrade in accommodations, these goldfish got bigger and bigger. I think after about 18 months, those suckers were as big as my hand and qualified as registered voters.

The moral of the story? Don’t pity the fish. That’s how they get you. You start out with one meager fish in a glass bowl, and the next thing you know, you’re shelling out for Barbie’s Dream Underwater Goldfish Condo.

The main reason I bring this up, however, is to compare goldfish to writing. Because here’s the thing I have learned: however much time you have to write a book, that’s how much time it takes.

School is back in session and in theory my writing time has just quintupled because my girls are now out of the house 6 hours a day, but I know full well that somehow, I’m not going to get that much more done than I did over the summer when I had four nanoseconds a day to write. Why? Goldfish theory, my friends. Projects swell to the size of your allotted time to work on them. Your progress will be exactly the same, whether you have two hours to work or twenty hours to work.

While this is an annoying fact of life, it’s also good news for anybody who thinks she doesn't have enough time to make headway on a novel because of work, family responsibilities, or nonspecific STUFF that gets in the way. Goldfish theory requires us all to recognize that we should never waste time wishing for more time, or heaven forbid, we should never plan to write only when we finally have more time at some magical point down the road. Even if you’ve only got 45 minutes a day or a few hours a weekend, you can still get a lot done. Because that’s what Goldfish Theory allows for.

So just keep writing wherever, however, and whenever you can, and never succumb to pitying that fish.
Posted by Unknown at 9:38 AM