Yoda Can Stick It

Here I am, four months into life as a mom to four kids, and several people have asked me, "Darling, brave, Kristen, what’s the big difference between having four kids versus three?”
Well, here’s what I can tell ya: With three kids, not surprisingly, a lot of stuff falls through the cracks.
With four kids, the cracks fall through the cracks.
Let’s discuss the phone in my kitchen for illustrative purposes.
It’s an old phone – not cordless -- and it has an answering machine integrated into it. I prefer to use this answering machine to take messages as opposed to the craptacular Verizon voicemail service I could use because, Oh, I don’t know, I’m one of those nutters who likes to actually receive my messages in a timely manner. Rather than on a four to six hour delay, which is how Verizon seems to operate. I’m pretty sure the state-run phone bureau in North Korea provides better service than that, but whatever.
Well, somebody – I’m not sure who and so far, nobody’s coming forward and fingerprint analysis has been inconclusive – knocked the phone off the wall, and when the phone hit the deck, the tiny plastic doohickey that holds the hand-set in place so it won’t fall out of the cradle broke off as a result. Then, before the plastic doohickey could be retrieved off the floor and replaced, thereby quickly restoring the phone to operational status, the dog ate it. I’m assuming she thought it was a cannellini bean, and, in her defense, it did sorta resemble one.
OK, so that pretty well took the phone out of commission because you could no longer hang it up, but I didn’t want to lose the voicemail capacity (see aforementioned reference to suckiness of Verizon voicemail), so I took a piece of duct tape and taped the phone into the “off” position.
You know, I’m sure I’m not explaining this adequately. Let’s just have a look at the actual phone. 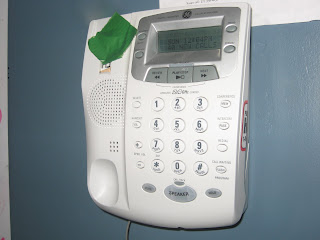 (Yes, that’s green duct tape, suitable for holiday gift-wrapping after the regular Scotch tape is gone because your kids used it all up to tape pencils to together to make a nine foot long pencil snake.) In the old, just-three-kids days, I probably would have gone out and gotten a new phone within five business days after it was rendered useless. But now? Well, here’s the thing, I just haven’t gotten around to it. It’s going on a month since the stupid phone broke, and still I don’t foresee getting to a electronics purveyor anytime soon. Maybe I’ll get to it next weekend. Or how about this? I’ll *try* to get to it over this coming weekend.
See, that right there is the crucial difference between having three kids versus four kids. I’ve become someone who says, “Yes, I’ll *try* to do that” or “I’ll *try* to be there at 2 pm…”  I now use the word "try" when I talk about doing anything, because frankly, I can’t guarantee that a series of ridiculously unpreventable events won’t occur that will keep me from doing what I intend to do.
Yoda says, “Do or do not. There is no try.”
Yeah. Well, stick it, Yoda. In my world there’s a whole lotta trying.
What have you been *trying* to do lately?
Posted by Unknown at 1:51 PM