Make Sure You Read the Fine Print

I’m going to be dropping a lot of names in this post, so put on your galoshes and watch where you step.
Kari Lynn Dell, the fair if somewhat dusty jewel of the Montana ranching world, took a break from her hogtying and elegant wordsmithery to pass on the Stylish Blogger award to me last week. 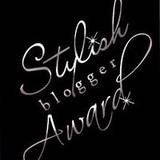