Valentine’s Day is almost upon us so I thought I’d do a post about love.
Don’t worry. I’m not going to get all gooney about my husband or kids. Instead I’m going to talk about my poor, dead dog. 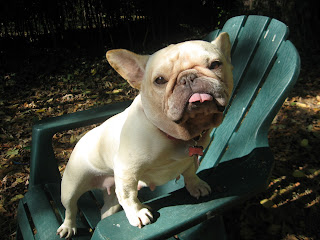 Her name was Jou-Jou, and she passed away just about this time two years ago.
She was four years old when we adopted her from a rescue group, and I won’t go into all the details of her background. Let’s just say, she spent several years in a puppy mill situation, and her life story is so sad it can only be properly told in a smoke-filled Parisian café, over several bottles of Beaujolais, with Edith Piaf playing in the background on a loop. Her existence -- it was très, très tragique.
Have you ever owned a French Bulldog? Are you familiar with the breed at all?
They are an ungainly beastie. Heavy in the front, weak-legged in the back. They sink like a stone in water. She was unable to go up or down stairs because once gravity gets a hold of that big head, French Bulldogs go down steps like furry bobsleds.
French Bulldogs are cold intolerant. And heat intolerant. Pretty much they can only exist in perfect, 72-degree weather with low humidity. Preferably with a light westerly wind blowing in across a sheltered bay lined with palm trees where frothy, rum-based drinks are served. They’re also not too fond of precipitation.
Bulldogs are also prone to frequent respiratory illness as well as food and environmental allergies. Jou-Jou was no exception. Near as we could determine through expensive veterinary testing, she was allergic to just about everything. She had a perpetually runny nose that I would have to wipe with a tissue several dozen times a day. Her allergies caused her fur to fall out in the spring time and develop itchy red welts all over her body.
She wasn’t good with other dogs. In fact, she pretty much wanted all other dogs to disappear from the face of the earth so that she might have the sun and moon all to herself.
She generated terrible, eye-watering gas. Think baloney-scented tear gas released into the atmosphere once an hour, like some ghastly anti-air freshener. 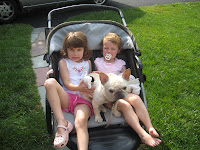 Was she lazy? But of course she was lazy! Mon Dieu! How can you even ask such a question? What self-respecting bulldog isn’t lazy? While many dogs have skills that make them ideal watch dogs, hunting dogs or even seeing-eye dogs, Jou-Jou’s only skill was the preternatural ability to find the softest place in the house to sleep. “Walks” entailed me pushing her in the stroller with the kids.
And speaking of the kids, she didn’t like them. No, no, no. Didn't care for them at all. She would nip at them if they approached me, especially when I was in the kitchen. And I was in the kitchen a lot cooking special meals for her because she refused to eat regular dog food. You see, the bulldog is a breed prone to weight gain, but she was actually underweight, and we had a hard time keeping the pounds on her. When she lost weight, she got sick and needed to go on antibiotics. So I had to feed her what she wanted to eat or else pony up more cash at the vet.
What else can I tell you about Jou-Jou?
Her response to most requests such as come, sit, or stay was simply, “Non.”
She often barked at the wall. No idea why. Chalked that one up to painful war memories.
She arrived un-housebroken and despite our best efforts, largely remained so.
After a flurry of astronomical vet bills, she passed away at age six from a brain tumor. This after a months-long episode of grand mal seizures that required the administration of medication multiple times a day. Via suppository.
Of course you might be wondering why. Why would anyone put up with such a very bad dog for so long? It was just one thing after another, ending in heart break and financial stress. Who needs that in his life? 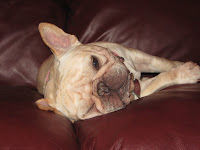 Let me ask you this: does anyone ever ask you why you write?
Well, there you go.
There is no rational explanation for love, now is there?
Posted by Unknown at 6:00 AM