A Banner Year and a Visit from the POTUS

What's this then? Am I going all political on my writing blog for my last post of 2010? 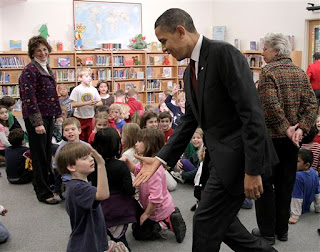 Not in the least. After all, President Obama IS a published author, so there's a tie-in right there.

But the real reason the POTUS's picture is here is because he paid a surprise visit to my kids' elementary school this past Friday. Is that awesome or what? He even read his children's book Of Thee I Sing along with Twas the Night Before Christmas to my daughter Lucy's second grade class. (That's her there, in the pink shirt and snow boots, kneeling down right behind his extended hand.)

Even though we live just a few miles from the White House, the odds of a sitting president visiting our kids' elementary school is no better than it is for anybody else. In fact, when we heard rumors on Thursday that he might be coming, I said, "Yeah, right. Believe that when I see it." But Friday morning we were greeted with legions of cops and bomb-sniffing dogs at drop-off. A short while later, President Obama arrived. By all accounts he was, and I quote, "totally cool." 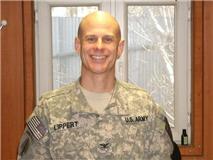 And speaking of totally cool guys, I've got another picture for you. This handsome gent here is my older brother and only sibling, Col. Andrew J. Lippert, and he is currently deployed to Afghanistan. He's not usually bald; in fact he's got a full and lustrous head of hair, but he recently shaved it all off in support of a fellow soldier's child, who is undergoing chemotherapy treatment for cancer.

So, yeah, he's not only SERVING HIS COUNTRY IN A WAR ZONE but also SHAVING HIS HEAD TO SUPPORT A KID WITH CANCER. 'Cause that's just the kind of guy he is.

Yes, of course he's the favorite. Why wouldn't he be? Believe me, I conceded the loss of our sibling rivalry many years ago, my friends.

We're all missing him this Christmas, and no one is missing him more than his equally heroic wife, who's single-momming it until he returns. But I have to say that I'm particularly sorry not to see him during the holidays this year because that glossy dome of his would be a primo target for a high-yield, thermonuclear noogie bomb. (I'll get you when you come back, bro. As I used to say so often when we were kids, stronger and quicker you may be, but you've got to sleep some time.)

And finally, as some of you may have noticed, I recently did a bit of blog redesigning so I could add threaded comments. In the process, I removed the picture of my muse, Ivan.

I know, I know. It's unfortunate. I fully recognize that Ivan is the coolest Russian bear muse out there, and I just wanted to assure you that he's fine, and we're fine -- he's not run out on me or anything, although if he had, this would be the time of year to announce that. You ever notice how many Hollyood couples announce that they're splitting up right before the holidays? You know, because they hope no one will notice. 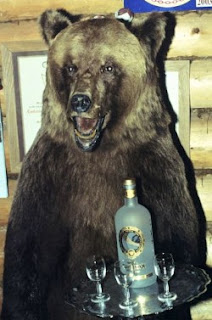 Anway, like I said, we're as solid as ever, me and Ivan. Why, here's a picture of him, taken just last night at the "Rock in My Pocket" office Christmas party. We had a great time right up until he passed out after singing a round of Russian folk carols. I got him the usual gift for Christmas -- a crate of apples and two bottles of Stoli -- and he didn't get me anything, but he's flat broke and I understand how that is. Being a muse isn't exactly a lucrative career, and besides, it's the thought that counts and he's fed me plenty of great thoughts this past year. Still can't tell what he's talking about half the time, but that doesn't stop me from enjoying our wrestling matches immensely.
So that'll do it for 2010. I want to thank you all for reading my blog this year. I hope you have a wonderful holiday season. Be kind to yourselves. Hope to see you all back here on January 5, 2011!
Posted by Unknown at 6:00 AM