The Enemy Between My Ears

Here’s why: I’m in-between projects at the moment. I finished a manuscript about three weeks back and decided that I should probably take a break. You know, to sharpen the saw, as they say. Besides, I finished the last manuscript on a Friday, and I really didn’t feel like it fit with my Gospel of Slack to go jumping into the very next book the Monday after. I’m not some workaholic literary drone. (Am I?)

Of course, right after finishing this last manuscript, I started getting this itch in my brain. It seems the brain wanted to get going on something new. I argued with it and said, no, man, chillax. We’re taking some time off. But my brain wouldn’t accept that. So what did it do? Did it respect my wishes to take some vacation days? No, it did not. That same brain that I'm now hating retaliated by choosing the wee hours of the morning for generating new project ideas. 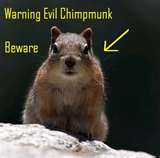 I'm prone to insomnia anyway. The minute stress hits my life -- which is pretty much, you know, every day -- my sleep cycle takes a hit. So I’ll wake up in the middle of the night and sometimes lie there for hours for no good reason (no, reading doesn’t help; no, I can’t do crossword puzzles – I’ve tried it all, believe me). During this recent project limbo, however, it’s gotten way worse. My brain has become like a crazed chipmunk on Mountain Dew.

Hey! Who’s up? Are you up? Cuz I’m up. Let’s talk. What do you want to talk about? I know! You want to hear all 50 state capitals in alphabetical order? No? That’s good because I don’t know them anyway. I do know some stuff other though, like, here’s some random pieces of various pop song lyrics! It’s a mash-up! La la la Baby baby baby ooohh! Whatsa matter? You don’t like The Bieber in your brain at 4 am? Too bad!

And then we’re off to the races. Thrown into all the background noise are useful things that I actually want to pay attention to: bits of dialogue, character back stories, settings, plot twists, the whole shebang. It’s like getting a middle of the night call from your friend who’s out at some really loud bar, just broke up with his girlfriend, and has clearly had too much to drink but insists on going over the mistakes he made in the relationship while at the same time sharing his insights into how he recently solved Fermat’s Last Theorem. You’re kind of enthralled by the prospect of what he’s got to say, but at the same time, it’s late and you wish he’d stop crying.

Well, I guess there’s nothing for it but to get back to work so I can shift all those machinations to the daytime where they belong. Then perhaps my evil, eager chipmunk brain will let me rest.

So much for vacation days, huh?

Man, I have GOT to talk to HR about this sorry benefits package I have. And to payroll, for that matter. They’re taking so many deductions out of my salary, it’s like I’m not even getting paid at all.
Posted by Unknown at 9:34 AM