Here I go with the panda thing again.

Loyal readers are no doubt well aware of my hatred of pandas. Here’s the full reference in case you’re new to the blog and my panda wrath.

And just what has reanimated my animus toward pandas this summer? Why nothing less than a visit to the National Zoo, of course. Those of you with a love of this worthless animal, turn back now because I’d first like to direct you to a story that was sent to me by my West Coast colleague who goes by the mysteriously haunting handle, “Denise.” (Not her real name.*) Check out the link, PANDAS ARE LOSERS.

So the dang pandas can’t get pregnant but once in a blue moon, and then when she does have the cub, she has twins, only to abandon one of them and then roll over on the other and kill it?!!! God, could this animal get any more loathsome?


Here’s what totally bummed me out on the latest zoo jaunt. Behold, a picture of the South American Giant Anteater taken by my lovely daughter. 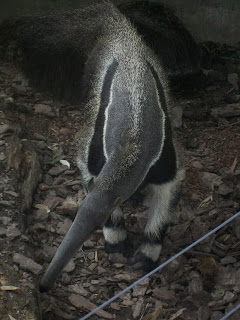 Mr. Anteater looks depressed, doesn’t he? (Or she. I have no expertise in sexing anteaters, but we'll assume it's a he.) You know why this anteater is so depressed? Because his enclosure is off the beaten path, hardly anyone comes by to check him out, and he’s fully aware that he’s kind of not that attractive.
Meanwhile, these rock star diva pandas have THIS in their totally tricked-out panda pavilion. 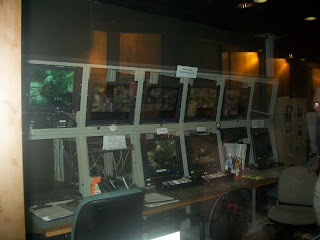 It’s got a mini-Houston mission control to monitor their every waking (and mostly sleeping) moment and keep track of each linear foot of bamboo that they stuff down their gullets at taxpayer expense. And probably they each have a high-def DVR to watch snuff films (Oh, you didn't know that about pandas? Yeah, they watch a lot of snuff films. I know, right? Awful.)

How could this not be a blow to the anteater’s self-esteem? Who could live in their pathetic little paddock knowing these pandas are up there in air-conditioned, first-class accommodations with people waiting in line to see them? Meanwhile, passersby look at the sign directing them to the giant anteater enclosure and say, “Oh. An anteater….Hey, let’s go get a sno-cone.”

So in summary I say again: Pandas = evil. When will the world wake up and realize that the scourge of panda love must end?

OK, onto other matters.

Perhaps this week you may find yourself in the position of having a few bucks that you don’t know what to do with. Here’s a thought: how about you lay off the hot wings and 50 cent drafts and forego that second blooming onion and do something useful with your money for a change? Why don’t you go and buy Blythe Woolston’s debut novel, The Freak Observer. Apparently it’s a really good book, and what’s more amazing, she typed the entire manuscript with her feet. Not because she had to, mind you. Just to give herself more of a challenge while writing it.

(Of course I made that up. Come on. She wrote the novel with her feet? Actually I probably shouldn’t put that out on the internet at all because this is just the sort of thing that’ll take on a life of its own, and the next thing you know, Blythe will be asked to be on Nightline and be billed as America’s foremost YA foot writer. So I take it back. She didn’t write the book with her feet at all. She is a regular, two-handed writer who did NOT write her novel with her feet. OK, well maybe the acknowledgements page. Maybe. But that's all.)

And since I’ve got my sparkly pimping hat on anyway, I’ll send you over to Sierra Godfrey’s blog for her contest wherein she asks you to describe a certain soccer player who looks like he gamely volunteered to get a haircut from a freshman at some technical training high school. I’m probably not explaining it very well. Just go and have a look see.

Until next week, my comrades.